Hebron – A City Turned into a Jail

A City Turned into A Jail

Outside the settlement Kiryat Arba (adjacent to Hebron) and its extensions, now live about 800 Jews in the Old City, in several main areas (see maps following). They are free to move around in the entire area, and expand their realm of control with the encouragement of the state and the help of the Israeli army. The expansion of Jewish settler-colonization in Hebron’s Old City entails the erection of military checkpoints and posts, further preventing Palestinian movement. The Palestinians remaining in the Old City suffer systematic violent assaults and harassment at the hands of the Jewish settlers, and all backed up by the ‘security’ forces. They live behind metal-screened windows. At any given moment soldiers may detain and arrest any Palestinian – man, woman or child.

) disconnecting the ancient center, the heart of Hebron, from the rest of the city

We are the last inhabitants

We are walking in Shuhada Street, in the part where the last of the residents are still living. The woman accompanying us was born here, and she answers any question   with ‘I may not’. She knows all the people who have remained in the nearly deserted houses and goes with us from one to the other.

We walk among the houses in winding ways; if you walk the street, a jeep might show up and soldiers will ask questions. And then, if your answers do not satisfy them, three faceless armed soldiers in uniforms will descend on you and you will have to answer what you meant, exactly. Better find a way that passes between roofs and adjacent entrances, inner courtyards.

One of the houses is inhabited by an 80-year old woman, living alone. Most of her neighbors are long gone. The windows are barred for fear of the stones and bottles that the settler-colonists and their children throw occasionally. Sometimes they bang wildly on the door. Her daughter who lives in a different neighborhood, comes to take care of all her needs every day. She has the ‘privilege’ of being on a list meant only for first-degree relatives. Some of them, however, refuse to be on the list as they do not wish to subject themselves to the army’s favors. At times refusal is a way to resist the occupation, at others it is of fear – and then they cannot care for their aging parents. The daughter is worried, for her mother is alone most hours of the day and night.

Next door lives a family running a kindergarten to which one may not climb the stairs leading from Shuhada Street. If you are Palestinian, of course… There are hidden ways to get to the kindergarten.

The children are happy. They were born to this. Their mothers, too, were born in various phases of this place’s becoming a jail.

Video - Better walk through the roofs and entrances

Hebron has experienced many and consistent acts of Palestinian and Jewish terrorism, such as the massacre during the 1929 rioting, when 66 Jews, living in Hebron, were murdered, and the massacre that Baruch Goldstein perpetrated on Purim Day 1994 when 125 Muslims in prayer were murdered inside the Al Ibrahimi Mosque (Cave of the Fathers).
All of these and more have become bleeding turning points in the city’s history.
After the massacre at the Cave of the Fathers, Israel instated a policy of extreme physical and legal segregation between Jews and Muslims. Whereas the Jewish settlers move unrestricted everywhere, Palestinian movement both on foot and in vehicles has been severely restricted around the market, the Casbah, and the main streets of the Old City

orders were issued for hundreds of shops. Thus the bustling center of Hebron collapsed economically – businesses and shops were closed and thousands of Palestinian residents left their homes. In order to enter their homes, go shopping, or to school, the Palestinians of the Old City now have to cross fortified checkpoints on foot, that are closed off at times without warning.
Even schoolchildren are not protected – numerous incidents have been documented of Israeli army patrols throwing teargas grenades into schoolhouses or in their vicinity, following suspicions or actual stone-throwing at military patrols. In 69 such incidents in 2019, about 1000 schoolchildren and teachers have been injured.

The Jewish settlers in Hebron are trying all the while, and rather successfully, to expand Jewish settlement at the Old City by purchasing houses in Palestinian neighborhoods such as the ‘Dispute House’, `Rachel and Leah House`, and the `Machpela House`. The structures are renovated and populated increasingly. The acquisition is usually performed through straw agents. In 2020 new construction plans for Jews have been approved inside the Hebron market area, and at the same time, a construction permit has been issued for the project called “Ezekiah Quarter”, in spite of a court order to stop the works. If these two projects will indeed be completed, they are expected to double the Jewish populace inside Hebron

The map of the part of Hebron under Israeli control (H2) :  barriers and  inhabitants (Courtesy of OCHA) 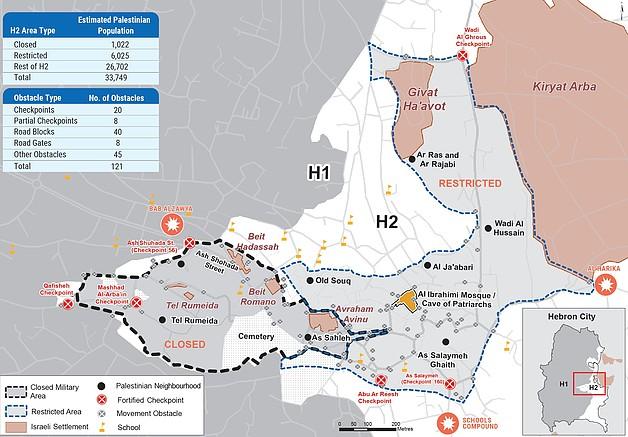 is one of the most sensitive areas in the western part of the Old City. It is declared a closed military zone and access to it is extremely limited for Palestinians.
The first settlement was created in the heart of this neighborhood as early as 1986. Now it already contains five spots of Jewish settlements, including army posts, in addition to the many checkpoints and barriers. In Purim 2016, two young men of Hebron stabbed a soldier at an Israeli army post at Tel Rumeida. One of the terrorists was shot to death by the soldiers, and the other wounded and then shot by Elor Azaria who was convicted of his killing.

In 2018, an archeological park identified with Biblical Hebron was opened to visitors on the western edge of Tel Hebron neighborhood. It is backed up with a new settlement and an army post located in an ancient olive grove belonging to a Palestinian resident. The park is the finishing point of a new tourist heritage route, far from the Cave of the Fathers. Thus the settler-colonists act on behest of the government policy and with the army’s help, to surround and isolate the Palestinian residents living in the ancient homes of this neighborhood, and make them leave 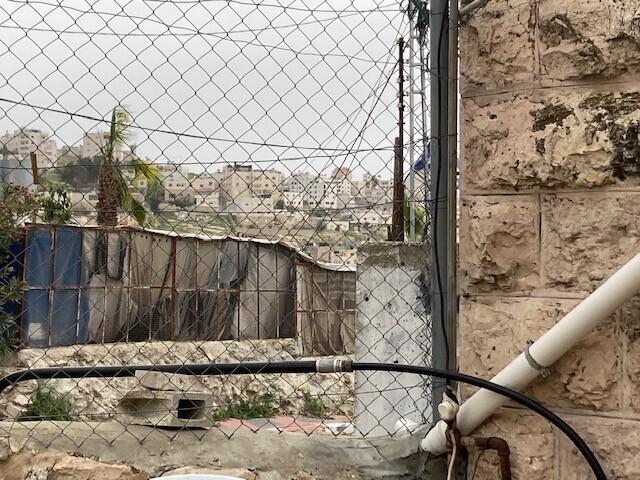 MachsomWatch activity in the Hebron area began in 2004, and weekly vigils, some bi-weekly, visit the many checkpoints surrounding the Old City.
We maintain contact with the Palestinian residents, with the kindergartens and schools in the Tel Rumeida neighborhood of the Old City, and especially document unbearable life conditions, injustices, and violence perpetrated by the Occupation policy dictated by extremist settlers.