Nabi Samwil: A village in a transparent cage | Machsomwatch
Skip to main content

Nabi Samwil: A village in a transparent cage

Nabi Samuel :  A village in a transparent cage

Today the issue of apartheid is a focus of international concern.  Israel rejects attempts to define it as an apartheid state because of its policy on the West Bank.  Does Israel, in fact, avoid subjecting the population of territory it controls to apartheid rule?  The treatment of Nabi Samwil village during many years can serve as an example of Israeli policy. 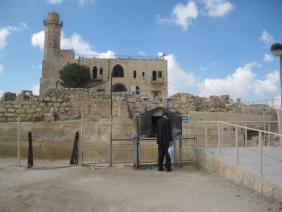 The Nabi Samuel fortress rises northwest of Jerusalem, topped by a minaret.  People coming from Israel reach it easily; from its heights they view the panoramic landscape and the extensive archaeological excavations below dating back to the seventh century BCE.  The Crusaders believed the tomb at the base of the fortress was that of the prophet Samuel (who lived in the eleventh century BCE), and the site became a holy place for the three religions.

But there’s one thing the visitor can’t see:  a Palestinian village has been there for 800 years.  As time goes by it has grown more and more transparent, hidden from view as the stranglehold tightens around it and the Grim Reaper threatens its existence.

Gideon, an archaeologist working with Emek Shaveh, tells us that until 1967 Nabi Samuel was an established village of 1000 inhabitants which developed around the mosque and whose residents owned thousands of dunums of agricultural land.  Most of them fled in 1967; about 250 remained.

In 1971 Israel expelled the residents and by the 1990s had completely “wiped away” the village buildings which had been constructed on archaeological strata from the Crusader and Hellenistic periods, without compensating the inhabitants.  Today the settlement of Har Shmuel is located on part of the land, and another portion has been designated as a national park.  The residents tried to rebuild their lives on what remained of their land a short distance from the original homes, in an area in which the village’s animals

used to be housed.

In 1995 the site was designated a national park.  The archaeologists who came to dig didn’t prevent erasure of either the remains of the Palestinian village or the remains and strata from the Moslem period.  An Arabic inscription from the Ottoman period discovered in the mosque was concealed immediately (an unacceptable step in archaeological terms).  Thus was archaeology enlisted on behalf of a narrative justifying annexation in the guise of scientific research.  New signs have already been erected containing biblical verses and referring only to Israelite periods.

And what about life there today?

A village under siege

Whoever makes the considerable effort required to tour the area will eventually discover the village of Nabi Samwil.  Its pitiful buildings are hidden behind a huge tower fitted with antennas and cameras, a few chickens, ducks, geese and goats wandering among them – all that the villagers own.  Nor does any posted sign indicate the presence of the village.  250 people are penned in there, suffocating, cut off from the world.

Some six years ago I met Palestinian teachers there who had come from various locations on the West Bank to visit a friend in the village.  But no longer.  Since the separation fence has been erected on the West Bank, the village has found itself in an enclave (which the army’s newspeak refers to as the “seam zone) located between the Green Line and the fence, its residents ripped from the West Bank.  Each trip to the West Bank requires crossing through the Jib checkpoint.  Travel to Israel within the Green Line is forbidden.  Children who attend school outside the village must carry a birth certificate.  A four-year-old child will be sent home even if the father shows the soldiers that he or she is listed in their father’s ID card.  Relatives outside the village need a permit issued by the DCO to visit the village.  A couple who marries can’t reside in the village; they must live in Jib or in Bir Naballah, and then won’t be able to visit their family.  Villagers are forbidden to bring home “commercial” quantities of merchandise.  What’s considered a “commercial” amount for people under siege?  The soldier at the checkpoint decides.  Water tanks weren’t allowed through the checkpoint.  The excuse:  they’re not “humanitarian material.”  Only the Lord of the military establishment is capable of explaining how 100 eggs or ten kilograms of meat or water tanks are “commercial” quantities” or a “security threat.”

A., a resident of the village, tells us about a settler who invaded the home of another villager who was in Jordan at the time.  That settler entered A.’s land and began plowing it with a tractor.  When A. tried to prevent him from doing so the settler ran over his leg, injuring him.  They called the police, a policeman arrived, saw the injured man but didn’t offer any assistance.  The reason:  A. can’t be brought to Jerusalem because he has a Palestinian ID, and an ambulance from Ramallah isn’t permitted to enter the seam zone.

New construction in the village, or additions to existing structures, are completely prohibited.  One villager added a room for himself to his parents’ crowded home. 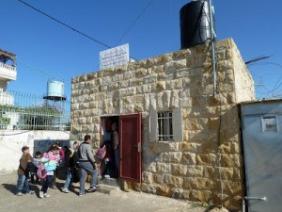 As soon as he was done the room was demolished, along with part of the original building.  We looked at the rubble:  as well as the additional room, which had been completely demolished, a roof had been destroyed and windows pulled out of another room of the original structure.  In desperation, he brought a trailer.  The result:  it was confiscated and he was arrested but finally released after paying a heavy fine.  A wall under construction around the courtyard is demolished.  A tree newly planted is immediately cut down.  A sign with the name of the village erected by the residents was confiscated immediately.  Why:  They’re all considered to be additional construction.

The tiny school has one room for children in grades one through six.  Queen Reina of Jordan donated funds for its renovation.  Now it has also received a demolition order.

What about earning a living?

As noted, most of the village agricultural lands have been taken over by the Har Shmuel settlement and the national park.  If someone erects a stand it’s immediately confiscated.  One of the residents opened a car-wash facility – the equipment was immediately confiscated.  Before the separation wall was erected, young men from the village worked in Ramot.  They no longer can obtain crossing permits.  So the residents of the village remain cut off, without work, with no access to a regional center, no medical or educational services.

In an attempt to earn money, women in the village created a small “feminist center” where they package honey for sale to the villagers and raise chickens for their eggs.  They also run a kindergarten.  Will their power of survival be enough to prevent the village from being wiped away?

I can already hear the righteous indignation in response:  Things are worse in Syria.  Israel is part of the western world, proud of being a “villa in the jungle,” “The only democracy in the Middle East,” but people are suffocating, their lives trampled and erased under its rule, according to its orders.Does that contribute to the country’s security, economy, moral position or good name?  How would they be damaged if the state allowed the residents of Nebi Samwil to live normal lives?

Whoever cares about Israel’s image should cry out, demand that the people of Nabi Samuel be allowed to live, and let Israel again be seen as a moral and humane country.