Anin checkpoint. Chelm checkpoint.. There is no end to foolishness' | Machsomwatch
Skip to main content
Back to reports search page 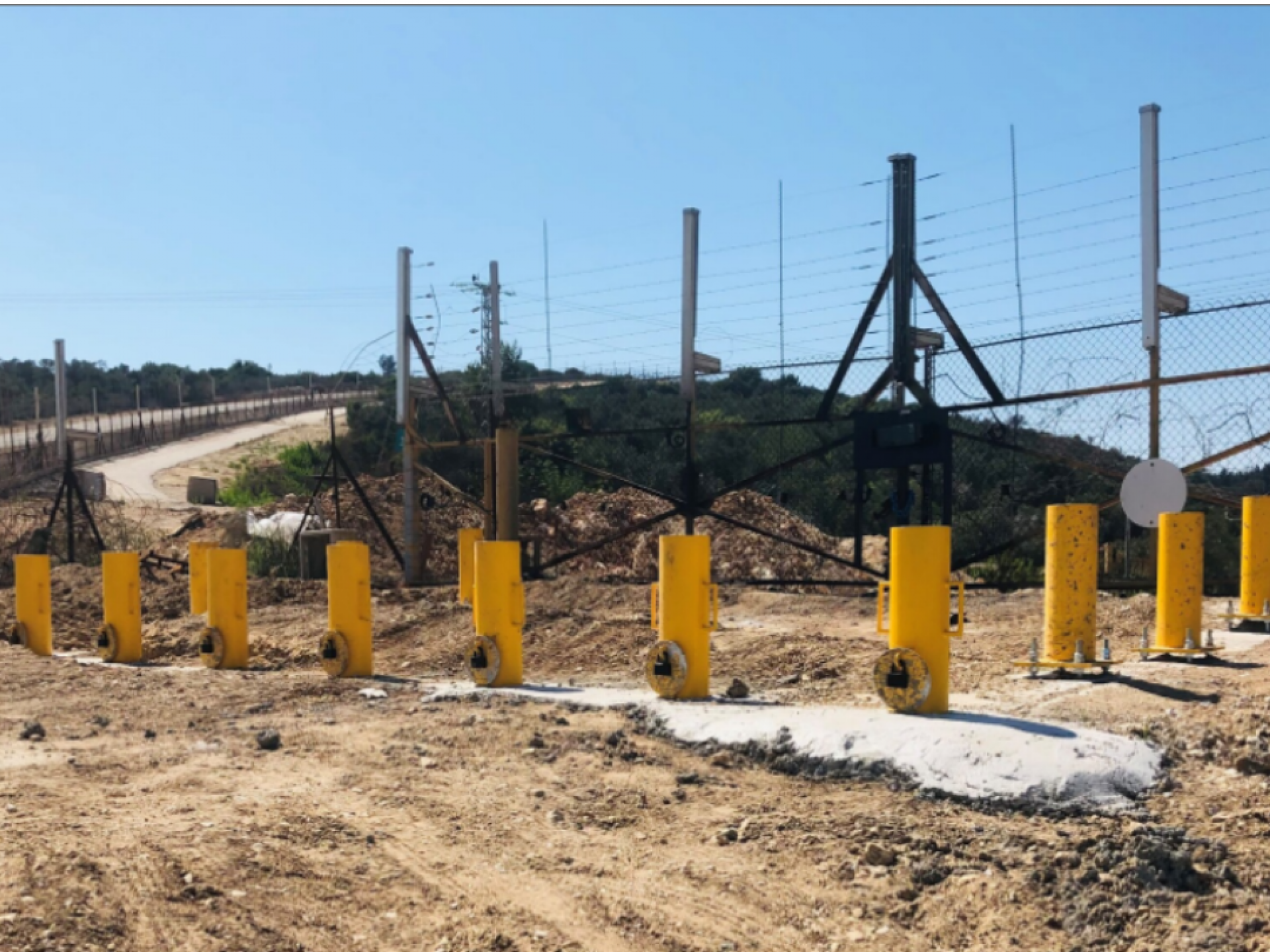 Photographer:
Hanna Heller
After thieves broke the lock at the main gate to smuggle a stolen Israeli vehicle into the West Bank, the IDF stuck iron pillars as an obstacle that could be easily moved ... 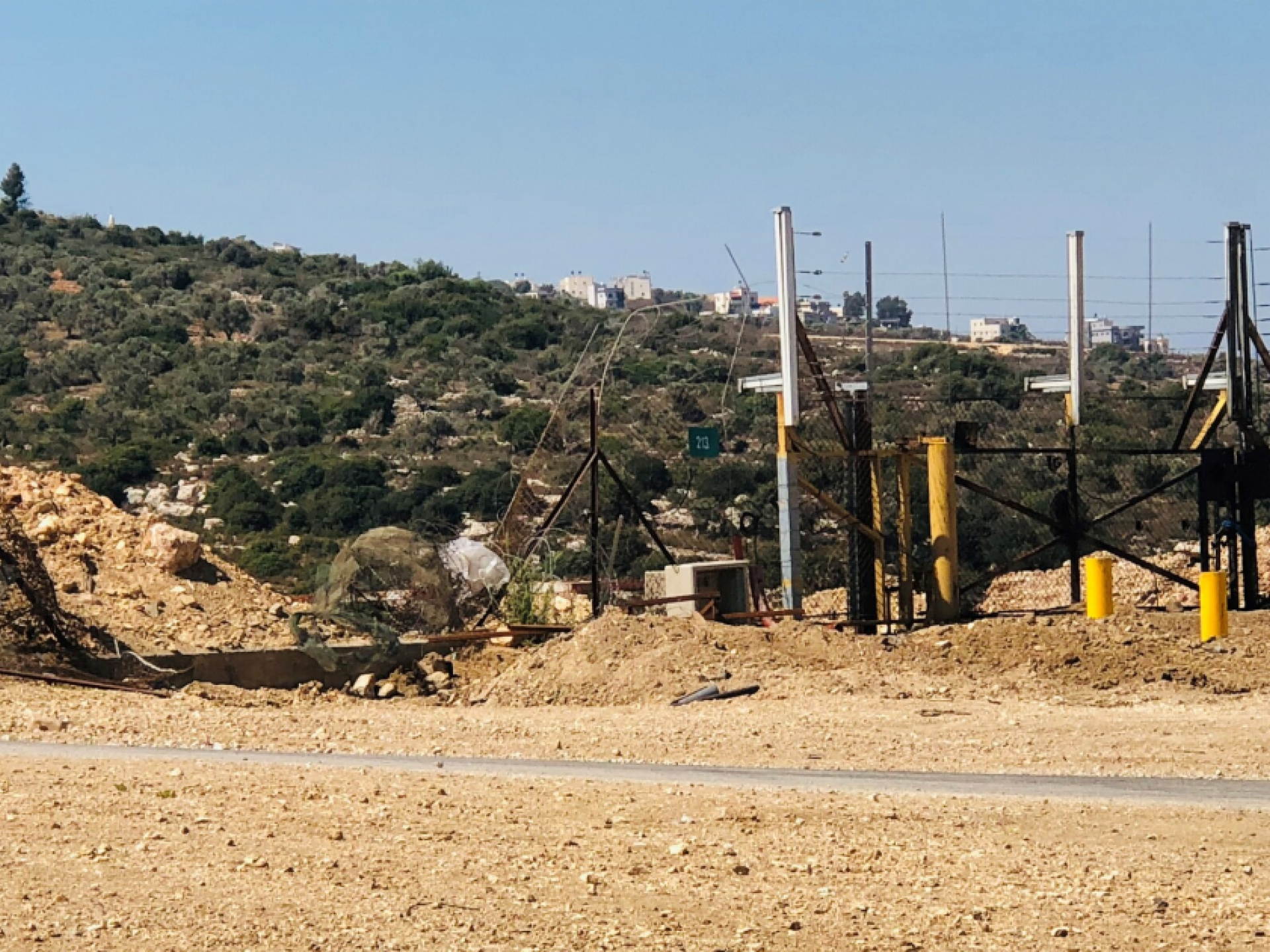 Photographer:
Hanna Heller
The locked gate is protected by barriers but next to it ... a large gap for pedestrians

On Highway 611—next to Barta’a Checkpoint, a car with workers returning from their jobs in Israel stopped, and the workers crossed through the breach in the fence next to the West Bank.

It is very quiet and there aren’t any people crossing at this hour.  In Daher-al-Malec village, we are witness to Israeli-Palestinian cooperation when roads within the village were covered with gravel stones that came from the excavations of the Shaked settlement.

M., his son, and a. tractor, wait for soldiers to open the checkpoint.  Five other farmers, who left in the morning for work, already returned home through the breach next to the locked gate.

Many new buildings were constructed in Anin and also in Palestinian villages in the Seamline Zone.  M. tells us that those who work in Israel, succeed in saving in order to build.

A new chapter in the IDF’s delusional proceeding at this checkpoint:

In front of the locked gate are yellow metal pillars that protrude from the ground. According to M., some time ago, car thieves were discovered who cut the lock and fled to the West Bank with the stolen Israeli car.  The rollers are supposed to prevent a vehicle from crossing. Piles of stones have also been placed next to the wide breach in order to prevent vehicles from crossing, but they also allow for easy passage for pedestrians. We already reported in the past on sawing the lock and stopping passage at the checkpoint. Now it appears that the soldiers saw the car smuggled and shot at the Palestinians, one of whom was injured and taken to HaEmek Hospital in Afula where they amputated his leg.

The soldiers arrived at 15:40, released two rollers, and opened the gate for M.’s tractor.  The soldiers remained calm and we left.

All along the roads on which we proceed from checkpoint to checkpoint—also in the Seamline Zone and in Area C that is beyond Barta’a Checkpoint (the road to Mevo Dotan)- new lighting pillars were placed.  We pass Barta’a Checkpoint and see many workers returned from work in Israel and the Seamline Zone.  From Jenin residents of Barta’a are compelled to cross by foot in the heat, via the vehicle checkpoint because the terminal is closed afternoons.  We pass the grocery in Amricha, which is already stocked with sweets and games in honor of the holiday of Eid al-Adha.

Ya’bed-Dotan Checkpoint – Many cars arrive from Tulkarm and Barta’a checkpoints traveling to Jenin (including a Palestinian car that arrived from the settlements).  The passage is quick.

The parking lots are full and no vehicles are parked by the side of the road (the threat of fines did its job).  Our acquaintance,  B., who works in the carpet factory, tells us that many factories in Shahak are closed; also the carpet factory was closed.  Ninety people were let go and only 11 found work in another factory.  Tens of workers continue to arrive at the checkpoint and cross to the West Bank.  Among them are a few women from Barta’a who leave to visit in Jenin

located on the Separation Fence east of the Israeli community Mei Ami and close to the village of Anin in the West Bank. It is opened twice a week, morning and afternoon, for periods of time that are growing shorter Lith time. It is meant for Anin farmers whose olive groves have been separated from the village by the fence. Transit permits are only issued to those who can produce ownership documents for their caged-in land, and sometimes only to the head of the family or his widow, eldest son and children. At times the inheritors lose their right to tend to the family’s land. The permits are eked out and are re-issued only with difficulty. 55-year old persons may cross the checkpoint (into Israel) without special permits. During the olive harvest season (about one month around October) the checkpoint is open every day and more transit permits are issued. Names of persons eligible to cross are held in the soldiers’ computers. In July 2007, a sweeping instruction was issued according to which whoever does not return to the village through this checkpoint in the afternoon will be stripped of his transit permit when he shows up there next time. Since 2019, the checkpoint has not been allways locked with the seam-line zone gate (1 of 3 gates

), and the fence around it has been broken in several sites.

This is a fabric of life* checkpoint through which pedestrians, cabs and private cars (since 2008) pass to and from the West Bank and the Seam-line Zone to and from the industrical zone near the settler-colony Shaked, schools and kindergartens, and Jenin university campuses. The checkpoint is located between Tura village inside the West Bank and the village of Dahar Al Malah inside the enclave of the Seam-line Zone.  It is opened twice a day, between 7 a.m. and 10 a.m., and from 12 noon to 7 p.m. People crossing it (at times even kindergarten children) are inspected in a bungalow with a magnometer. Names of those allowed to cross it appear in a list held by the soldiers. Usually traffic here is scant. 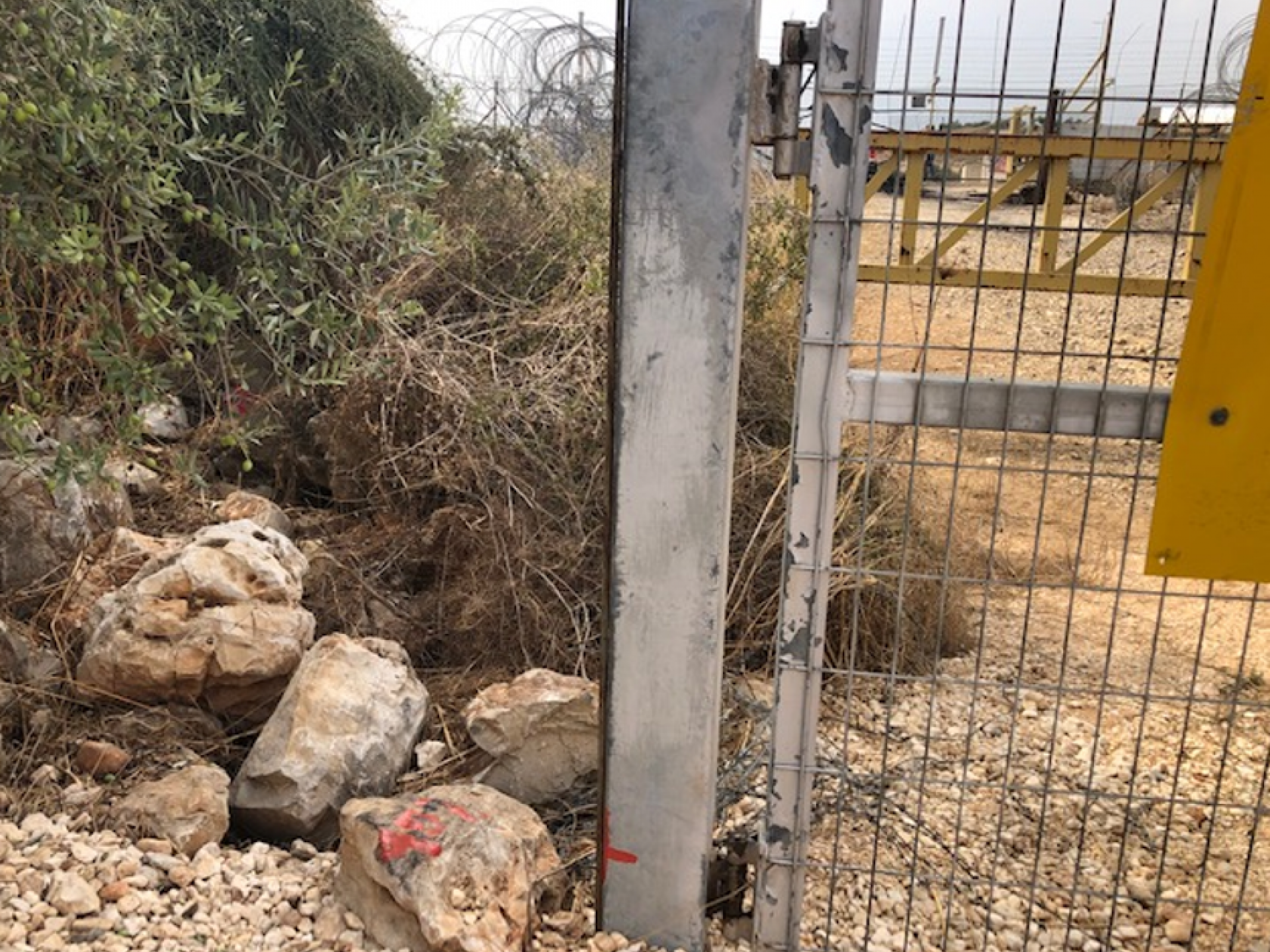 located on the Separation Fence route, east of the Palestinian town of East Barta’a. The latter is the largest Palestinian community inside the seam-line zone (Barta’a Enclave) in the northern West Bank. Western Barta’a, inside Israel, is adjacent to it. The Checkpoint is open all week from 5 a.m. to 9 p.m. Since mid-May 2007, the checkpoint is managed by a civilian security company subordinate to the Ministry of Defense. People permitted to cross through this checkpoint into and from the West Bank are residents of Palestinian communities inside the Barta’a Enclave, as well as West Bank Palestinian residents holding transit permits. Jewish settler-colonists of Hermesh and Mevo Dotan cross here without inspection. A large, modern terminal is active here with 8 windows for document inspection and biometric tests (eyes and fingerprints).  usually only one or two are in operation. Goods may be passed here from the West Bank into the Barta’a Enclave up to medium commercial extent (especially farming produce) by a permanent and registered group of drivers. When administration was passed over to a civilian security firm, a checkpoint was made permanent at the Ya’abad-Mevo Dotan Junction. It is manned by soldiers who sit in the watchtower and come down at random to inspect vehicles and passengers (February 2020).

This checkpoint is located on road 585, at the crossroads of Mevo Dotan settler-colony / Jenin/ Ya’abad. It has an army watchtower (‘pillbox’ post) and concrete blocs that slow down vehicular traffic. It was erected when Barta’a Checkpoint, lying to the west on the Separation Fence, was privatized and its operation was passed over to civilian security personnel. Since December 2009 this checkpoint enables flow of Palestinian vehicular traffic towards the Barta’a Checkpoint. Seldom is it manned by soldiers sitting in the watchtower, who conduct random inspections of vehicles and passengers. (february 2020)