Road 443: Built for Palestinians and on their land, but they can't use it. | Machsomwatch
Skip to main content
Back to reports search page

Road 443: Built for Palestinians and on their land, but they can't use it. 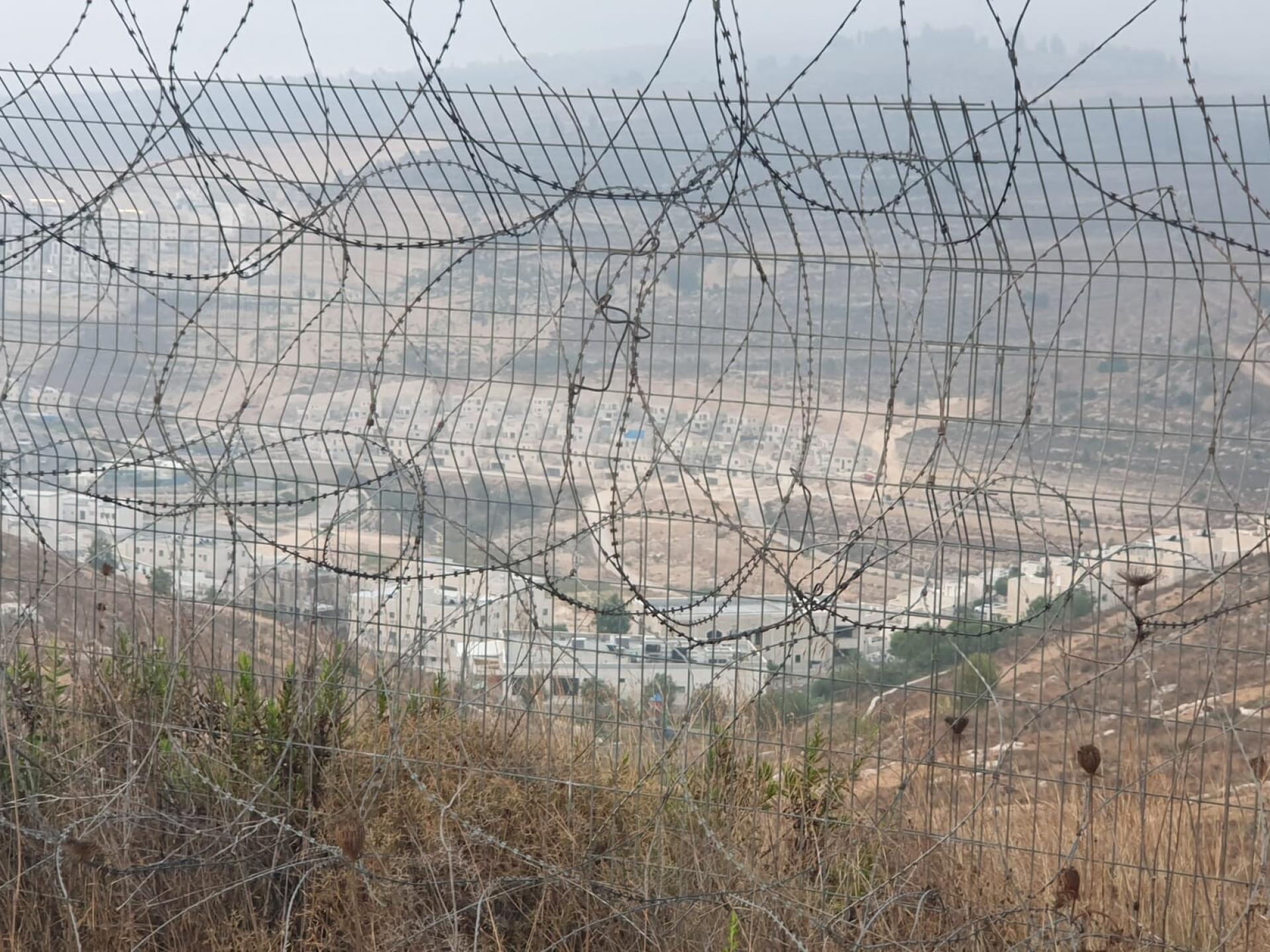 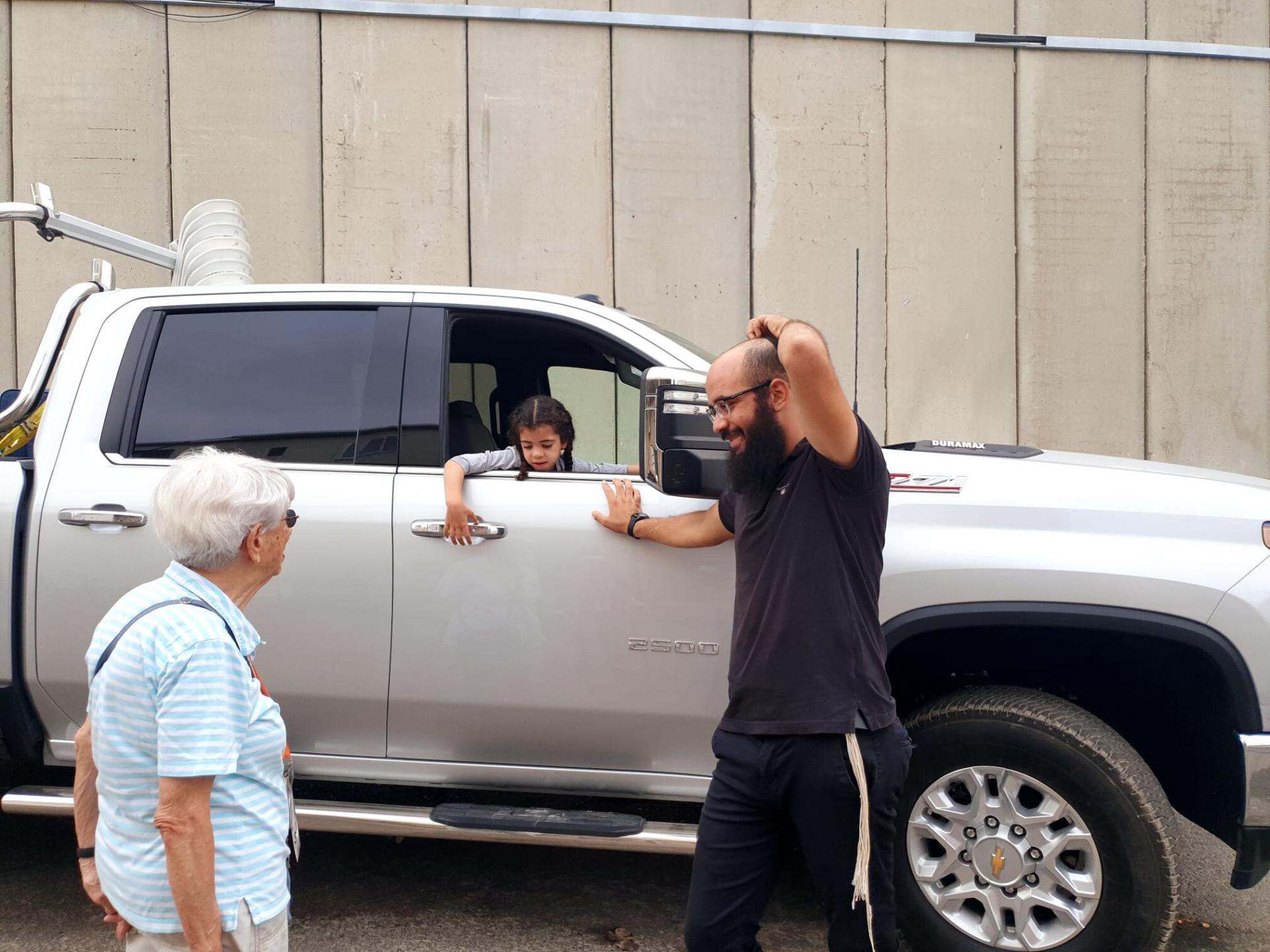 Rachel's Tomb: Conversation with a settler and his daughter

Just a look from the car on the way to Jerusalem. Sunday after the Feast of Sacrifice (Eid al-Adha) - Crowds of workers and collection vehicles crowd at the exit of the checkpoint on their way to work. It is difficult to reach this checkpoint from the villages because the exits to Road 443 are blocked. Many leave their cars near the roadblocks at the exit of the villages and walk to the checkpoint. It is also difficult to return home after work. Why should it be like this? This road, built on the land of the Palestinian villages, was intended for their use and so the Supreme Court ruled, but left a small loophole for 'security considerations' that became a sweeping reality.

On the way we stop to photograph the fulfillment of the plan of Greater Givat Ze'ev through the classic maneuver of settlement expansion. The satellite settlement  Agan Ayalot was built a few kilometers from the town, and after a few years they filled the empty space between them in another satellite neighborhood - Ramat Givat Ze'ev. Now it is possible to connect to the settlement of Beit Horon and that opens the door to a "Seam Zone bloc" or annexation...

Many workers are standing at the exit of the checkpoint, waiting for transportation to work or looking for work. Sunday is a very busy day. From four in the morning until now 9,000 people have already passed. We came to find out an important matter. Women who pass by here daily complain that the passage intended for women only is not opened, and they are forced to struggle with the men’s hustle and bustle in the morning, including unwanted touches and also real bruises. Hannah saw her acquaintance last week exhausted and covered in blue marks.

We entered a checkpoint that was pretty empty at this time. Only about 3 manned stations and the rest are automatic stations utilizing face recognition technology recently spread all over the world. In the meantime, two DCO representatives arrived and we began telling them about the women's problem.

Suddenly, G., a police officer who was called to the scene, attacked us. He claimed to be in charge of the checkpoint at the moment and demanded that we go outside. We explained that we have been standing in the Israeli exit for many years, watching the progress of the last transition phase after all the security checks and electronic identifications have been performed. After an argument that included a barrage of shouts and insults, G. decided to stop the crossing, on the pretext that the many soldiers, policemen and security guards who had meanwhile gathered around him were busy defending us and therefore could not operate the crossing. Only Hannah's phone call to the DCO management managed to get the checkpoint back in operation and brought us P., the real transit director, who apologized and recognized our right, as a human rights organization, to stand in the public area where civilians pass through the checkpoint. P. asked that we not photograph the checkpoint facilities We decided to file a complaint against the police officer and against a security man (who refused to identify himself) who informed Natanya that "a woman like her does not deserve to be treated with respect." Little did he know who he was messing with...

We never got used to the ugly concrete structure that surrounds the beautiful dome of Rachel's Tomb, which is commemorated in the nostalgic drawings we remember. A crime against humanity for which a post-1967 Jewish architect is responsible. We heard from the Makam Watch team that the right of prayer for Palestinians at Rachel's Tomb had already been practically blocked when a monstrous separation wall was built around it. We wanted to see what has changed in the past year at the Bnei Rachel boarding school yeshiva near the tomb building, founded by a well-known racist, and what has resurfaced in the settlement of the families behind the building.   And so: After a year of not being here, we discovered that there were already 60 yeshiva students (all of them served in the army), and 11 families living there. Family members and a children's playground were added, with a pillbox in one of its corners. An architectural gem for playgrounds. We met a nice settler and his sweet daughter, and also a recently born kitten with an acute eye infection covering its eyes. We suggested to the settler and his daughter to try to cure him with anti-inflammatory eye drops.

Efrat, built on hills upon hills, aims to grow east of the area known as E2 (Givat Eitam - Nahala), doubling its population and thereby creating a buffer between Bethlehem and the southern West Bank. In the meantime, until that comes true (there is an appeal in court over the plan that the state has approved in principle) we have seen massive construction in the east, in Givat HaZayit. Through the Abdullah Ibrahim checkpoint, on a side road, come the workers and construction materials of the many buildings that have sprung up and will pop up in it. Today we saw how it works: the contractor comes and talks to the CBT (this is actually the commander of the pseudo-military checkpoint here), brings workers we heard identify themselves at the checkpoint with generic names: Efrat 20, Efrat 35 .... probably compares to the list of permits the contractor received with The settlers' representative at the Etzion DCO - then the worker enters or not.  We also saw two Palestinians waiting for someone to come who needs them. Who knows if in this form of engagement additional payments to the organizers of the transactions will flow from the side. Netanya said it sees the settlers getting permits as a separate queue at the DCO and now sees the expression of this system on the ground. We know that there are other such pseudo-military barriers in the large settlements, and that employment in the settlements is the most available livelihood open to the Palestinians.

On the way back to Jerusalem, we drive on the huge bridge of the southern American Road (above Nahal Darga) whose construction has been completed. The bridge connects us and the settlers from Har Homa and Tekoa and its surroundings to the Talpiot area east of Jerusalem. Meirav Michaeli - Help!

Located adjacent to the Separation Wall ("Jerusalem Wrap") at the north entrance to Bethlehem, this checkpoint cuts off Bethlehem and the entire West Bank from East Jerusalem, with all the serious implications for health services, trade, education, work and the fabric of life. The checkpoint is manned by the Border police and private security companies. It is an extensive infrastructure barrier and is designated as a border terminal, open 24 hours a day for foreign tourists. Israeli passport holders are not allowed to pass to Bethlehem, and Palestinian residents are not allowed to enter Jerusalem, except those with entry permits to Israel and East Jerusalem residents. Israel buses are allowed to travel to Bethlehem only through this checkpoint.
The checkpoint, which demonstrated harsh conditions of crowding and extreme passage delays for years, started employing advanced electronic identification posts has upgraded its gates

Adjacent to the checkpoint, in an enclosure between high walls and another passage, is the historic Rachel's Tomb, which is now embedded within a concrete fortified building. It contains prayer and study complexes for Jews only, as well as a residential complex.

It is located on the separation fence, west of the al-Jib enclave. The checkpoint is regularly manned by Border Police and private security companies. Palestinians are not allowed to cross except for residents of the al-Khalaila neighborhood of the village of al-Jib, residents of al-Jib who own land on the western side of the fence, residents of a-Nabi Samuel, which is their only access road to Ramallah and the villages in northwest Jerusalem, as well as Palestinians with work permits in the Givat Zeev settlement and UN workers passing through UN vehicles.
(Updated January 2020)